It's the first night of the weeklong retreat at Lua — a rustic eco-lodge nestled in a river valley high in the Chapada da Veadeiros near Alto Paraiso, Brazil. As dusk settles into the valley with a whisper, the cicadas drone and the fireflies glow green. Thirty people sit silently around a fire on the riverbank. The flames' shadows dance across the ceremonial totem: a tree that has been painted black across its trunk and adorned with a feather headdress. Standing in front of the totem, Klica Onajo, a leader of the Funio Indian Tribe of northeastern Brazil, begins to chant.

"We did not come here by coincidence." His words conjure the spirits of the river, the forest, and heavens. "We are here as guests to share our stories," he bellows. Kathy Von Keorber, the retreat's organizer and producer — begins to tremble as the drumbeat intensifies. Her body writhes and wraps through the sand into the center of the circle. Embers spit and fly from the fire. The dance begins. The voices of the Funio mingle with the river's subtle melody, evoking a state of trance.

"We are here to discover our spirit dance," Von Koerber explains during the opening ceremony. "Rituals bring us into communication with ourselves, this river valley, and each other."

After the initiation ritual, the group gathers to participate in the first of three traditional plant healing ceremonies. Colombian healers Hernando Villa and Alberto initiate the ritual, passing the sacred tobacco and "yahee" plant around the circle. Like Klica Onajo, they too guide the group in prayer through song and music to connect with the land and cosmos. It isn't until the pink sun emerges from behind the hills that everyone rests, exhausted from the medicine's journey. "Welcome home," Mother earth coos, sunlight glowing through the thatched straw hut onto the sleeping bodies.

As the week progresses, the twenty international participants gather in many circles. The retreat is loosely structured around Butoh dance workshops, nature excursions, and the plant healing ceremonies. They gather around the dining room table where three fresh meals are prepared daily (food carted in by donkey from Alto Paraiso); in the sauna (a wood-burning stove built into an adobe dome next to the river, crafted and built by Lua's founder, Sargon); on the yoga mat (daily sessions taught by guest Deva Hari Parkshara); and under waterfalls.

It's not easy to get to Lua. One must fly to Brazillia and hire a taxi or bus to drive to Alto Paraiso, three hours northeast of the capital. Then, after off-roading through the rural foothills for about an hour, it's an hour hike to the camp. Luckily, if you can't carry all your belongings on your back, donkeys will assist with baggage. But once you've arrived, secluded without electricity, hot water, or internet signals, the pressure from high-speed modern society melts away. Time and space expand into a thick and velvety quality: the perfect condition for the soul to thrive.

In addition to communing as a group, the week is about contemplation and personal reflection. Each person has time to expand his/her own internal landscape. Nada Katz journals just before the candles light up the dormitories at dark; Leah Fleischman adopts a hammock in the main lodge and reads; Haale Gafori and Matt Kilmer constantly jam together and learn new rhythms on local instruments.

"When life gets challenging, we separate and limit ourselves. But being here reminds me to really appreciate and enjoy the abundance all around us," Katz said.

Among the many medicinal rituals practiced during the week, Von Koerber guided the group in a rigorous and experimental dance workshop. Using organic movement and guided imagery inspired by Butoh dance and improvisation, the group reconnected — to themselves, each other, and Mother Nature.

The European avant-garde of the 19-teens and 20s had reacted to global industrialized warfare with Dada and Surrealism, meeting a shattered world by shattering tradition in the arts. A generation later, Butoh dance was born from the grim cloud of the Hiroshima Atom Bomb in Japan, as a revolt against the constraints of conformist, traditionally militarist society. The grotesque form of Butoh broke rules of traditional dance, returning to a more raw, visceral, and primordial form of movement. Although there are many variations, it is, essentially, the body interrogating humans' connection to society and nature.

In the words of the well-known experimental theater innovator Jerzy Grotowski, Butoh is a search for "a very ancient form of art where ritual and artistic creation are seamless. Where poetry is song, song is incantation, movement is dance."

Cut off from the outside world and plugged into the vibrations of the river valley, participants in the workshop at Lua had a chance to explore these themes. At the beginning of the workshop, Von Koerber asked, "What is your personal dance? How will it empower you to life more fully?" A teacher of Butoh dance for six years, she uses the style to reconnect to the sacred and give people the tools to take responsibility in the present.

The workshop began every day with a warm-up to activate the core, also known as the Dan Tan, the energy wheel located just below our belly buttons. The dancers aligned their spines, visualizing they were puppets dangling from the heavens by an invisible string. This string attaches to the crown of the head, moves through the vertebral column, and out the tailbone deep into the earth. Rooted firmly and floating effortlessly, their bodies became open conduits between heaven and earth. From here, they practiced surrendering to forces greater than personal ego.

"The dancer does not move the universe, but rather it is the universe that moves the dancer," Von Koerber explained. Von Keorber's teacher, master Atsushi Takenouchi, explains this mystery as "Jinen." Translated loosely as "all that is larger even than Nature," Jinen is the flow that dances through all living beings, whether we are aware of it or not. Butoh dance challenges us to open to the unknown. Regardless of previous experience (only three people considered themselves technically trained), the workshop challenged the dancers to take risks. Bare and honest and open, they moved beyond their mental, emotional, and physical restrictions.

"At the point when I thought I would collapse from dancing, I harnessed my energy and pushed through. Instead of stopping, I raged forward into a new level of strength," Leah Fleishmen said.

The dancers practiced walking a razor-thin line known in Buddhism as Zero Point. Quivering along the veil that separates life and death, they stepped towards this absolute nothingness and spun into the subtleties of an in-between, trance state. Inhaling, they surrendered to the Jinen's force. Exhaling, they honed their corporal sensitivity. All senses expanded, they breathed through the heels, elbows, sternum, spine. Awareness heightened, they sensed the most subtle of movements: the heat from the sun as it inched across the sandy beach, the sound of pebbles collecting at the bottom of the river.

Using verbal cues and constant coaching, Kathy led the group on a journey into uncharted psychological and cellular consciousness.

"The human body is a map. It holds all our personal history, trauma, stress. We can also chart the entire universe, full of air, water, earth, and fire. Within each cell, pigment, joint, we contain memories, cataclysm, explosions from the beginning of time," Von Koerber explained to the group during a morning session. Butoh dance, she continued, gives us the tools that allow us to access our genetic memory and DNA in order to explore even the deepest of our primordial roots. In this sense, dancers approach the style as if it where a "Dance of Darkness," a way to dive into the shadow, the uncharted territories of the psyche, being, and imagination.

In one hour-long exercise, dancers smothered themselves in red mud and then allowed it to dry and harden on their bodies. Encased like mummies in the hard clay, they slowly broke out, channeling the ancient spirits rising from a four-thousand-year slumber. The group explored other forms of life and death process, too: embryo to elder, seedling to sycamore tree, raindrop to iceberg.

With its roots in Buddhist meditation, the practice helps unite the mind, heart, and body through physical rigor and constant self-reflection. Through mindfulness, dancers cultivate a willingness to open up physical, emotional, and spiritual pain that has accumulated throughout our lives. Many believe that we heal by dancing with and through this pain.

As tension dissolves, so do old habits. We study ourselves and the movement as if we were scientists, becoming aware of our weaknesses, strengths, and movement patterns. We listen deeply and embrace our personal and collective history. When we create space to see ourselves for who we truly are, we can move past the superficial to a deeper realm of understanding. We enter the unknown, where the dance thrives. Exhausted and open, the dancers' bodies and minds expand. They take on a new, empowered form of relating to the world.

The workshop took advantage of Mother Nature's stage as much as possible. The group danced under waterfalls, on river banks, among bamboo patches. One afternoon, each dancer chose a rock along the river with which to have an hour-long duet. From a distance, it looked as if Andrea Olsen was sleeping atop the giant quartz boulder in the middle of the stream. But a closer look revealed the true story. She shivered slightly, shook delicately, mirroring the crystalline flecks embedded into the rock. Although her movements were subtle, seemingly nonexistent, she was fully present and engaged in the dance.

"The practice helps me drop from my thinking mind into my feeling body. Here, I feel a deep intimacy with all living things around me. I hear the songs of Nature, and dance Her vibration," she said.

In this way, the dance becomes a prayer, invoking ancient tribal trance dance. Using breath, music, chanting, and movement, these ancient forms connect us with the spirits of the past to receive guidance for the future.

After hours of exploration and creation, the workshop ended with solos developed by each dancer. Risky and beautiful, each solo was a personal, empowered statement inspired by the spirit. Jeremy Geffen slinked out of a tree trunk like an anaconda; Devi Baumbach floated underwater, rocks weighting her beneath a raging waterfall; Amber Joy Rava writhed on a floor of dead leaves, hidden among a bamboo tree patch.

"The truth of performance stimulates the will to LIVE," Von Koerber says. "It is the innate longing that a Butoh dancer shares with a tribal dancer: to allow the true rumbling of the universe to enter and unite with one's body."

For information on the July 10-20 retreat, please send email to [email protected] or visit http://kiahkeya.com/ for details. 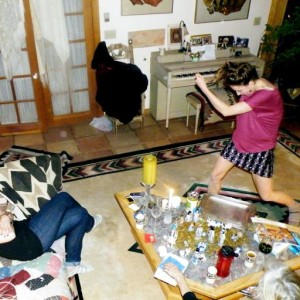