Magic mushroom use among Tolkien’s contemporaries and a review of The Shamanic Odyssey: Homer, Tolkien, and the Visionary Experience, by Carl Ruck of Boston University, co-author with Albert Hofmann and R. Gordon Wasson of the classic, groundbreaking study The Road to Eleusis: Unveiling the Secret of the Mysteries.

The journey began in northern Africa, as recorded in the author’s earlier autobiographical account, The Jaguar that Roams the Mind: An Amazonian Plant Spirit Odyssey (2008) and it brought him eventually to his wife and coauthor, Susana Bustos, Ph.D., who was studying the healing songs, or icaros, of the mestizo vegetalista shamans of the Peruvian Amazon. The present book, The Shamanic Odyssey: Homer, Tolkien, and the Visionary Experience, is also something of a personal Odyssey, combining Tindall’s abilities as a classical guitarist and a professional scholar of medieval English literature1 and ancient Greek epic.

Of course, the fantasy novels of J.R.R. Tolkien, philologist and Professor at Oxford in Anglo-Saxon, are now part of the general culture of the present generation through their film adaptations. The novels burst upon the world at the incunabula of what has come to be termed the Psychedelic Revolution of the 1960s and satisfied a thirst for a mythopoeia to codify the meaning of the flood of personal vision quests launched upon the world through experimentation with drugs.

Although Tolkien began his training as a Classical scholar, he proposed that the pagan traditions of pre-Christianized Europe, as preserved in the Nordic Epics and the Arthurian legends, offered a better mythological paradigm than the mythologies of the ancient Classical world. He even hoped that the educational system could be revised to make the Nordic myth the basis for a more indigenous cultural identity for the British Isles.

While it is true that one will search in vain for an overt reference to a psychoactive sacrament in his writings, the metaphors for the potion or the magical object of the quest are obvious, as Tindall points out. These metaphors may have arisen from actual experience. Tolkien came from an academic and literary society that was well aware of such substances, both from membership in secret societies and from personal experimentation. His closest friend, and advisor during the ten years that he worked on The Lord of the Rings, was C.S. Lewis, whose fantasy novel The Chronicles of Narnia makes an explicit revelation that the little creatures who rest in the shade of their parasol-like single foot are an anthropomorphism of magical mushrooms, known as ‘Shade-foots’ or Sciapods since Classical antiquity. Since these fantasy novels are ostensibly written for children, it would have been inappropriate for the author to be more explicit, but it is characteristic of the genre to encode more adult themes. The Pre-Raphaelite Bloomsbury Group included the Classicist Jane Harrison, whose former student and companion Hope Mirrlees published Lud-in-the-Mist (1926), a fantasy novel often cited as a precedent for Tolkien’s novels. It revolves about the magical fairy food that steals people away to fairyland. Tolkien would also have been well acquainted with the Celtic Revival and the numerous collections of Irish folklore and myth amassed by the poet William Butler Yeats, who died in 1939. Yeats, familiar with the effects of the psychoactive cactus peyote, had knowledge of the magical transport to fairyland.2 If Tolkien was unaware of the fairy food, he would have indeed been unique.

Nor would Tolkien’s faith as a staunch Roman Catholic have necessarily been an obstacle. The Catalonian artist Antoni Gaudí (1852-1926) is presently a Vatican candidate for beatification as ‘God’s Architect.’ His cathedral of the Sagrada Familia currently nearing completion in Barcelona is generally recognized as a magisterial hymn to the forces of the natural world, a sacred forest, in the likeness of a fairy castle. It is well known that both he and several of his wealthy patrons experimented with mystical visionary experiences accessed via mycological agents, some of which blatantly adorn his buildings.

It was, however, simply a sensed affinity of spirit and Tindall’s own love of the Celtic tradition that drew him to Tolkien for this study as ‘one of the greatest explorers of the intensified trajectory of consciousness,’ and Tindall expressly divorces the great scholar and poet from contamination with his own personal Odyssey. As he transitions to the topic of the Tolkien fantasies, he expressly declares that the man ‘arguably the foremost in restoring the prestige of primal consciousness to the modern world, never visited the Amazon, danced with indigenous tribes, or drank consciousness-altering potions.’*

Tindall’s Odyssey proposes restoring a voice to Homer like that of the previous centuries’ great Celtic bards. This is still a contentious endeavor, even today.

Yet we must remember that ‘Classics’ is an area of study into the cultures of ancient Greece and Rome. It is not a privileged academic discipline. It is a subject to which various disciplines are applied, such as linguistics, language, philology, archaeology, history, psychology, mythology, comparative literature, anthropology, botany, pharmacology, musicology, art, architecture, cultural evolution, and so on. As such, a good Classicist should be multidisciplinary.

Tindall’s comparative investigation of Tolkien and Homer, Celtic and Classical epic, against the backdrop of the healing songs and utilization of the healing, entrancing, and pedagogical powers of plant spirits within the vegetalista tradition of Peruvian shamanism, is the essence of good Classical scholarship, even if it infringes upon experiences deemed inappropriate for professional detachment. He may have gone Native, but who among us would not want to wander home on the streets of ancient Athens after a day spent in the Theater of Dionysus, or participate in the Spartan cult of the wolf? The latter is an example of what Tindall terms ‘animal becoming,’ a common experience among indigenous shamans.

As Tindall demonstrates, Circe is the ‘mistress of beasts,’ with an antiquity traceable back at least to the cave paintings of the Paleolithic period, before the Greeks ever existed. Homer, or rather the oral tradition that flowed as the fine blaze of song from the one possessed by the persona of the legendary singer called Homer, was the evolution of centuries, perhaps millennia, of oral telling. It is obviously a version of the shaman’s song, or of what was once the shaman’s song become sophisticated in the course of so long an evolution.

Tindall convincingly argues that ethnobotany, the study of medicine among traditional cultures, is key to understanding crucial features of Homer’s text, such as the nature of the moly plant that Hermes offers Odysseus to counteract the spells of Circe. To illustrate his point, he offers the negative example of the classical scholar who once ingested a large quantity of laurel leaves to test if they would induce the clairvoyance attributed to the oracular priestess of Apollo at Delphi, merely assuming that eating the leaves would bring on the required altered consciousness, never considering how a pharmakeus once picked the leaves or what song she had to sing to them. In the same way, the chemical firms ransacking the Amazonian jungle for marketable drugs do not consider what ritual restitution must be made for the privilege of extracting the plant, or whether the drug will be effective without the traditional healer or without acknowledging the resident spirits.

We are again reminded of the relevance of ancient tales to our own age in the Greek mythological tradition on Philoctetes, who inherited the poisoned arrows of the hero Heracles. Odysseus and the son of Achilles are sent to fetch him for the final stage of the Trojan War. Are the drugs on the arrows sufficient, or must the other warriors also be reconciled with the foul stench and the mad fits of the angry bowman? As it turns out, you can’t have one without the other. It is probable that the Amazonian healing that Tindall and Bustos are studying is not exportable, or that it is ineffective without the songs and an appropriate respect of the native spirits.

Tindall examines several significant episodes of the Odyssey against the backdrop of his own encounter with indigenous cultures: the Lotus Eaters and the problem of addiction, the enchanting singing of the Sirens and initiation, the descent into Hades and the visionary trajectory, and finally the episode of Odysseus in the cave of the Cyclops Polyphemus, where the encounter between the civilized man and the aboriginal monster is brokered by the especially potent drug of the wine and the symbolically significant single visionary eye of the Cyclops. After Odysseus reveals his name to Polyphemus, the blinded monster suddenly understands the meaning of the prophecy that he had been told of years ago about the man who would come to harm him, and makes an attempt at reconciliation.

Odysseus refuses to return to heal the wound of the blinded monster. As Tindall points out, he could have done so. The encounter is paradigmatic of the Westerners who have plundered the paradise of the New World, exploiting the abundance of the natural environment and leaving devastation in its wake. The teachings of the older, prophetic traditions of the native cultures of the Americas are that this may be only a passing phase in the long view of history. The two ways of culture may yet be reconciled, according to an ancient prophecy, when the eagle and the condor fly together.

In conclusion, the authors’ exploration of the shamanic, indigenous characteristics of Odysseus’s journey through the ancient otherworld of divine powers is a noteworthy new contribution in the field of Classics. In particular, their reading of the Odysseus and the Cyclops episode in the light of the encounter between the indigenous peoples of the Americas and the ‘civilized’ European conquistadors opens marvelous new possibilities for the understanding of the mind of Homeric man.

1. The Battle of the Soul in Sir Gawain and the Green Knight: The Influence of Mystical Theology on the Artistic Conception of the Gawain Poet, 2009

2. Alexander Norman Jeffares, A Commentary on the Collected Poems of W.B. Yeats, 1968

*Tindall’s addendum: At the time of the writing of The Shamanic Odyssey, I had believed that the psychedelic mushroom, Psilocybe semilanceata was native only to the Americas and that they had been introduced to England after Tolkien’s creative conception and writing of The Lord of the Rings. It turns out I was wrong. According to mycologist Roy Watling, P. semilanceata is found from the northernmost island of the Orkney to the western extremities of southern England and is considered native to the British Isles. It is also a widespread species in Europe, with no differences in DNA between specimens from Scotland to Spain.

It turns out to be perfectly plausible that J.R.R. Tolkien could have directly experienced the resident divinities of plants that his work celebrates so markedly. Certainly, mushrooms (although not psychedelic) play an important role in the culture of the Shire! Frodo’s appetite for them is legendary, at least with Farmer Maggot. 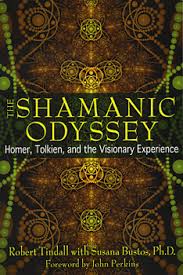 A long time practitioner of Zen Buddhism, and an inveterate traveler, whose work explores the crossing of frontiers into other cultures, time depths, and states of consciousness. He is the author of two books on shamanism, "The Jaguar that Roams the Mind” and “The Shamanic Odyssey: Homer, Tolkien, and the Visionary Experience.” Robert lives in San Francisco, and co-leads occasional journeys into the Amazon rainforest and to the Andean archeological site of Chavin de Huantar to encounter the healing traditions there. Visit his blog at http://www.roamingthemind.com