From August 17 — 23rd, 2017, 30,000 participants joined an international cast of artists and crew for the Oregon Eclipse Festival.  The gathering was a collaboration of 12 event production companies from 10 countries.  It rivaled Burning Man in its physical size and artistic scope, with a long list of performing bands and DJs, a multitude of interactive installations, workshops and lecture spaces, circus acts and performances.  From numerous full-on concert sized stages to funky waterslides and tree houses, tea domes and permacultured greenhouses, the grounds stretched out for miles over the 55,000 acre private festival site, four hours southeast of Portland, surrounded by the Ochoco National Forest.

Symbiosis and friends put on a good show, but the star of the week was unquestionably Earth’s own sun, eclipsed by our moon on the morning of August 21st.

The festival had been sold out for months, and as my trip neared, I’d begun to do my research about eclipses and what their draw might be.  My curiosity was piqued by eloquent essays tracing the historical fascination with eclipses, explanations of their cosmic significance by the trusted spiritual investigator Rudolf Steiner, and more mainstream video testimonials to the transformative experience of taking in a total solar eclipse.

My flight arrived from New York and the Oregon media was issuing dire (and ultimately unfounded) warnings of gasoline shortages and long delays as millions of spectators descended upon the first state to see “the Great American Eclipse.”  The 60 or so mile wide path where the sun would be entirely eclipsed by the moon cut directly through the remote wilderness of the festival’s Big Summit Prairie before continuing across the rest of the country.

As travel turned into pilgrimage and event entry into temporary community, it began to dawn on me that this experience was going to be a whole order of magnitude larger than the partial eclipse I’d experienced in some long ago science class field trip.

THE PATH OF TOTALITY

It had suddenly gotten much colder.  I hadn’t expected that.  I’d read and watched plenty of experts, but now that it was happening it felt like entirely uncharted territory.  The eclipse felt utterly new. The sun slowly turned into a golden crescent as the dark face of the moon ate more and more into its brightness.  The light around us began to change.  The optics got extremely unusual as an alien darkness fell, and I couldn’t tell if my sunglasses were on or off.  I’d been sitting against a tree in amber fields of dry grasses and sagebrush, and suddenly purple blossoms appeared where none had been before.

It was a little after 10am, and the horizon was the colors of familiar sunset – pink and orange with wispy, swirling clouds.  But it wasn’t the horizon that drew a collective breath.  The sky above us was the dangerous deep blue/grey of an oncoming storm.  And there, near the top of the familiar dome, the heavens were transformed.  The frame had fallen away.  Concepts failed.

It was only days later that I felt I could, or even wanted to, put the experience into words.

A moment before the total solar eclipse, I rose from my sitting position, chilled and intensely alert, crouched low readying myself for anything.  The darkening sky crescendoed into a brilliant void, beyond any known color, and I raised my arms in reverence to what had become absolutely other-worldly.  Our familiar sun had transformed into, for lack of a better word, a deity.

There are now many beautiful photos circulating, but in a world saturated by impressive images – this was truly a moment where “you had to be there.”   What has stuck with me wasn’t just the image of what was temporarily in the sky that morning; what lingers most strongly is the shockingly intimate relationship I experienced to what was in the sky.  It was not that the eclipsed sun felt close.  Nor did it feel far.  The truth is this: the distance between myself and the eclipsed sun had vanished. She and I had merged, distance and time were no longer as I ordinarily perceive them.

And here I use the pronoun “She,” because to use “It” would feel untrue.  In this moment outside of time the feeling of intimacy between the eclipsed sun and me was so strong that the word “love” is not to overstate it.  Most shocking still is that, in some unexplainable way, the feeling seemed reciprocal. In my life, I’ve known the sun as the great provider of light and warmth.  I’ve regularly felt grateful and more than a few times have even felt awe.  But the sun has always remained a radiant ball far away in the sky sending its light in all directions to fall on tree and rock and me, alike.

The morning of Monday, August 21st, at the strangely heightened moment of total eclipse, the sun became a giant eye, an organ of perception.  This mighty illuminated black sphere – the tendrils of its umbra licking out on all sides like an other-worldly jelly fish – seemed to be paying attention!  I could feel this celestial being’s presence in a way that was beyond all expectations.  My hands, raised to the sky, traced the eclipsed sun’s contours as though I were signaling a code I had forgotten I knew.  So, this is what it was for a mortal to communicate with a god!

And then, just over two minutes of clock time, a spark of bright sun cracked the upper right hand edge of the disc, and the spell was broken as quickly as it had come on.

The atmosphere lightened and familiar optics returned.  Speechless, I took in my surroundings like a new born.  A small group to my right were in tears.  The group to my left had begun to run and laugh like children, busting at the seams with the wonder of what we had just witnessed.

Off a ways, a large circle of people holding hands had formed.  They slowly spiraled inward to a group hug.  But mostly people stood still, shocked and dazed.  I was one of them.

Do I move toward other people or away from them?

I stood, resisting any attempt for words or concepts to come in and chase away the wonder that filled me.  When I finally did walk, it was with tentative steps as though uncertain if the earth would hold my weight.  What planet was I on anyway?

I walked further into the Prairie, the opposite direction of where tens of thousands had just taken in the spectacle – where native elders were holding ceremony, where two solar temples were still thronged with people, laughing, crying, in awe.  The Beatles broke the silence as “Here Comes the Sun” played from one of the stages.

Over where the grasses greened, I found a winding stream and lay down next to it.  I listened to the babbling of the water and felt touched.  Venus had been a bright presence next to the eclipsed sun, and now here again, the feminine calmed the uncertainty of me, and I closed my eyes there in the grass.  The sun was more familiar now, warming me, bright from the other side of my closed eyelids.  The sound of the water entered me in a pure and unfiltered way that I don’t think I’d experienced since childhood.

I may have slept.  I can’t be sure, but when I got to my feet, I was refreshed.  Still tender and cautious in my mind and words, but able at least to reenter the festival created as context for just this occasion.

In the days following the festival, social media was filled with discussion of its merits. The comment threads ran long with positive stories of transformation – the creative community people had experienced – lives forever touched.  But the complaints and snide remarks also piled up: the extremely long entry lines (some folks waited over 20 hours to get in and set up camp), the non-stop trance music stage aimed directly at where people were trying to sleep (the merits of trance itself as a music genre seems to be in hot contention), snarky (and largely inaccurate) news articles appeared, as did more balanced ones.

There are many video documentaries chronicling the various elements of the gathering.  But if you have never been to a gathering of this sort, please, whatever you do, don’t place much trust in the news articles or the videos.  Festivals, like the best of life, are subtle and aren’t easily captured in photography slideshows or re-cap videos.

For me, the week witnessing the continued growth of the international festival scene is just the latest chapter in my life-long research.  Every festival reinforces my faith in the potential of a new renaissance across human civilization.  But with each new season my idealism also becomes more specific and nuanced.  I become increasingly aware of the personal obstacles we carry that keep this cultural renaissance from taking greater effect in wider society.  My hopefulness takes on a different character.  I’m waiting less for the clueless masses to “get it,” or for the vibrancy of a participatory culture to “scale up.” Instead, my certainty grows that the truly radical work lies within myself.  The social gatherings act as important catalysts and supportive inspiration for taking up the often arduous and tedious work of transforming myself in order to transform the world.

The human renaissance is indeed taking place.  It takes place in and through me.  In tackling and evolving the stuck and untransformed places inside myself, I participate in the continually unfolding festival of creation.  Here, in one succinct paragraph, is the personal meditation I bring from the Oregon Eclipse Festival to use as a guiding star over the weeks and months to come:

The eclipse was a message of the times, and the times call for each of us to evolve our own story toward wholeness.  In the words of Becca and Rick Tarnas, father and daughter presenters at the festival, the times are calling for us “to discover our Solar Feminine and our Lunar Masculine.”  “We are being asked to re-wed what has been falsely estranged,” Caroline Casey said from a dusty festival stage.  The Zeitgeist (spirit of our time) calls for us to embark upon a new sort of hero’s quest, to become more conscious of the unconscious, to expand our definitions of intelligence, knowing, being human.  We are called to get comfortable with the uncomfortable, to transform judgement into curiosity and to ask better and better questions.  The spirit of the times asks, above all, for the practice of metaphoric agility–for telling a new narrative, personal and collective.

The festival ends, and we return to the work (sometimes slow and sometimes fast, sometimes hard and sometimes effortless) of transforming the world through our own self transformation.  The eclipse passes, and we’re left with an invitation to recognize the wonders in all our (extra)ordinary every days. 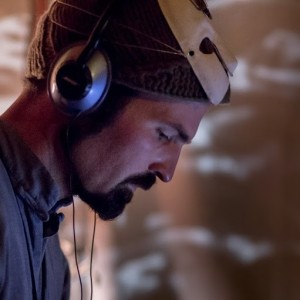