We are all one. We are also, simultaneously, different.

We are different people and different cultures with different challenges and perspectives. We are all one, and we are all different — and these two facts are compatible.

These differences are of great value to us. When we come together to learn from each other everyone, is enrichened by the process. Of course, learning requires letting go of certainty, requires letting go of what we think we already know to actually learn something. This is essential, it can also be very, very difficult if we are not comfortable admitting our limitations.

In specific regard to this episode, I have to recognize my own limitations as a white person who grew up in mostly-safe, mostly-middle class neighbourhoods in Canada talking about the challenges and struggle of growing up as a black person in mostly-unsafe, lower-economic class neighbourhoods of London, England. I can understand the essential pain of being human in its many forms and its impact on a person, but I cannot truly undersatnd what it is like to grow up as a black man, a decadent of 500 years of slavery, in a neighbourhood where serious violence on the street, including murder, is common, and the psychological and cultural challenges that come with that.

So when it comes to understanding the potential of psychedelics in the modern world, one of my limitations is understanding those potentials as they manifest in the living reality of different cultural groups of which I am not a part. One of those groups being the black African diaspora living in East London, UK.

Thankfully, we (the global psychedelic culture) have the brilliance of Darren Springer shining a light on the potential of psychedelics for black communities in the UK, as well as the pan-African use of psychedelics back through history and mythology. 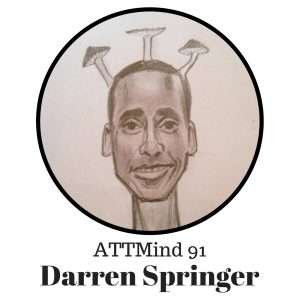 Darren Springer is a grass-roots researcher and event organizer based in London, the Director of Ancient Future, the Convenor of the Psychedelia Railway Gatherings and curator at Earth Tone Arts. Collectively his work aims to inform and empower individuals from diverse backgrounds to cope with social challenges and contribute to community development as well as self-improvement in an innovative, creative, culturally-aware style. By day Darren teaches organic horticulture and food enterprise to young people in London and grows edible mushrooms. He has spoken in the UK, Africa, Europe and the US sharing his extensive research on African Entheogenic plants and their various applications on the continent and the diaspora.

In this (on-location) interview, Darren talks about the ancient history of pan-African psychedelic use and travels forwards through time along the wings of mythology until the myths dissolve into the harsh reality of slavery, racism, and neighbourhoods infused with violence. It is grounded in this reality that Darren shares with us the potential of psychedelics (psilocybin mushrooms in particular) for the healing of historical trauma and the revitalization of black communities in the UK.

Featured image for this episode is a modified version of ‘BASSE LOVE’ by Chor Boogie, used with his permission. Check out his art. It is incredible.

OFFER WHAT YOU CAN IN A ONE-TIME PAYPAL OR BITCOIN DONATION, OR you can BECOMe MY PATRON ON PATREON.