We know that the universe is expanding– and at an accelerated rate. Scientists don’t know what is causing the increase in speed exactly, but they have given it a name. Dark energy. This unknown form of energy acts in opposition to gravity, and could determine the fate of our universe. Now, NASA is constructing the WFIRST telescope to investigate this mysterious phenomenon. (Alert to alien enthusiasts: this would be a moment to tune in).

In the world of psychedelics, the concept of expansion and contraction is fundamental. When taking a substance, one can experience a growth in perspective, awareness, and a feeling of unity with the universe. Afterwards, the sensation is often followed by a contraction, which is a normal step in integrating the experience into this space and time. And one hears this a lot in the psychedelic community – that the process reflects a larger pattern in nature, found even in the movement of our breath. Though considered universal, it might not be the case for the universe at large.

The universe is expanding, that we know, but will it keep going and going on forever? Or, will it eventually stop and begin to contract? It was seen as a matter of energy density – whether or not the universe had enough or too little to slow itself down. Nonetheless, most assumed that gravity would eventually reign the universe in. That didn’t turn out to be true. Though most cosmologists believe that the universe will keep on expanding forever, there’s much to consider in wrapping ones mental faculties around its fate.

From a Static to a Dynamic Universe

We take for granted how much our conception of the universe changed in the 20th century. We didn’t even know that the universe was expanding to begin with. Instead, we believed that it was static and steady until the early 20th century when the fixed and stable picture began to be disturbed.

Einstein was developing his theory of gravity at a time when all we really knew was that our galaxy existed. And the universe certainly did not move. Thus, Einstein was operating under the same assumption that everyone else was. While he was building his theories of spatial and general relativity however he understood that the equations did not equal a static, unchangeable universe. Einstein was puzzled. He didn’t quite know what to do with the idea, so he made up a theory in order to keep the universe a still entity.

In 1927, Edwin Hubble first shook the world with his discovery that there was more out there than our Milky Way Galaxy. Then, two years later, Hubble came to another and perhaps even more astounding discovery–that the universe wasn’t static at all. It was expanding. Still, even though scientists could not predict whether or not the ever-growing universe would stop, they assumed gravity would slow the rate of expansion.

The Expansion of the Universe is Accelerating

Skip ahead to 1998. The Hubble Space Telescope observed in distant supernovae that the expansion of the universe had accelerated. It had been expanding at a slower rate in the past. That, scientists could tell. So, gravity failed. The universe literally sped up. To put it simply, scientists concluded that some kind of energy field was making this happen – and they dubbed it dark matter. Apt, because no one knew what it was exactly. And we still don’t. The acceleration remains a mystery.

What took us so long to discover it? We didn’t notice it because dark energy is so weak on our tiny scale of humans, planets, even galaxies. Nonetheless, it is actually always here. In the room, in your body, but gravity ensures that you don’t go flying off. The rules change however once you get into the intergalactic space.

We know that dark energy makes up about 68% of the energy content of the universe. Dark matter makes up about 27%. Dark energy and dark matter are not the same thing. Everything else–like what’s on Earth, and the matter we can see with our telescopes…binoculars–makes up 5% of our universe.

But what the…what is dark energy? NASA is using the WFIRST telescope to figure that out. It will produce images with the same incredible resolution as the Hubble telescope, but on a scale that is 100 times larger.

It will bring us the first big picture of the universe.

We’re taking a glimpse into cosmic history, and perhaps our cosmic future. It’ll measure the positions and distances between millions of galaxies for example, which is why I’m saying to the alien enthusiasts out there to start paying attention. Through the WFIRST, scientists will also observe crazy space-time warping disturbances that gravity causes on galaxies, and one type of an exploding star. Who knows what any of that means in concrete terms as of yet, but we’re studying dark energy.

Here’s the rub. If dark energy–whatever it is–continues to accelerate our universe’s expansion, then we may be heading towards a “Big Rip”–what?

“In this scenario, dark energy would eventually become dominant over the fundamental forces, causing everything that is currently bound together – galaxies, planets, people – to break apart.”

The Break from Belonging

As a concluding thought, Hannah Arendt was a political theorist who was arguably most well-known for her book The Origins of Totalitarianism. In it, she claimed that the breaking from belonging in the 20th century was at the root of our modern isolation and loneliness. And, Totalitarian regimes.

In light of our current climate, in which we can feel this disconnection at every level, the “mental health crisis” being one of the manifestations of that idea, it is a wonder that our larger universe may be reflecting this same idea back at us. The Big Rip? The universe evolves with us.

The Future is Unknown

It is somewhat impossible to predict the future. We can perceive it from a present point in time which changes moment to moment. Yet, even that is a limited perspective on a universe that has no limits in theory. There are many presents, there are many pasts, and there are many possible futures – all happening at the same time; a thing which doesn’t technically exist.

“The unpredictable and the predetermined unfold together to make everything the way it is.” –Tom Stoppard.

In the course of the 20th century, our entire perception of the universe opened beyond most brilliant mind’s wildest dreams. Our ideas about the universe continue to evolve – it keeps changing shape. In the meantime, the WFIRST will bring us even more astounding photos from space–the big picture as we can conceive of it now. So WFIRST, get to work, start snapping.

Who knows what they’ll find next. 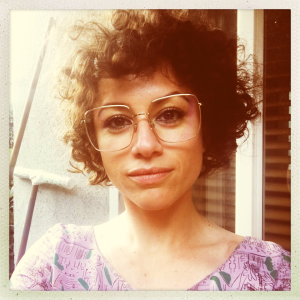 Maria Mocerino
Maria is a writer, foreign language nerd, and aventurière based in New York. She is the Senior Writer/Editor at Reality Sandwich. Formerly, she served as the Culture Editor for Rogue Magazine. Outside the world of psychedelics, upcoming projects include a book about Second City original and legendary actress, Barbara Harris. A bonafide lover of travel, vintage clothes and gymnastics. If there is a plane, terrace, trampoline, or sale, Maria’s probably on it.instagram: @marmoch twitter: @mariaamocerino
All Posts