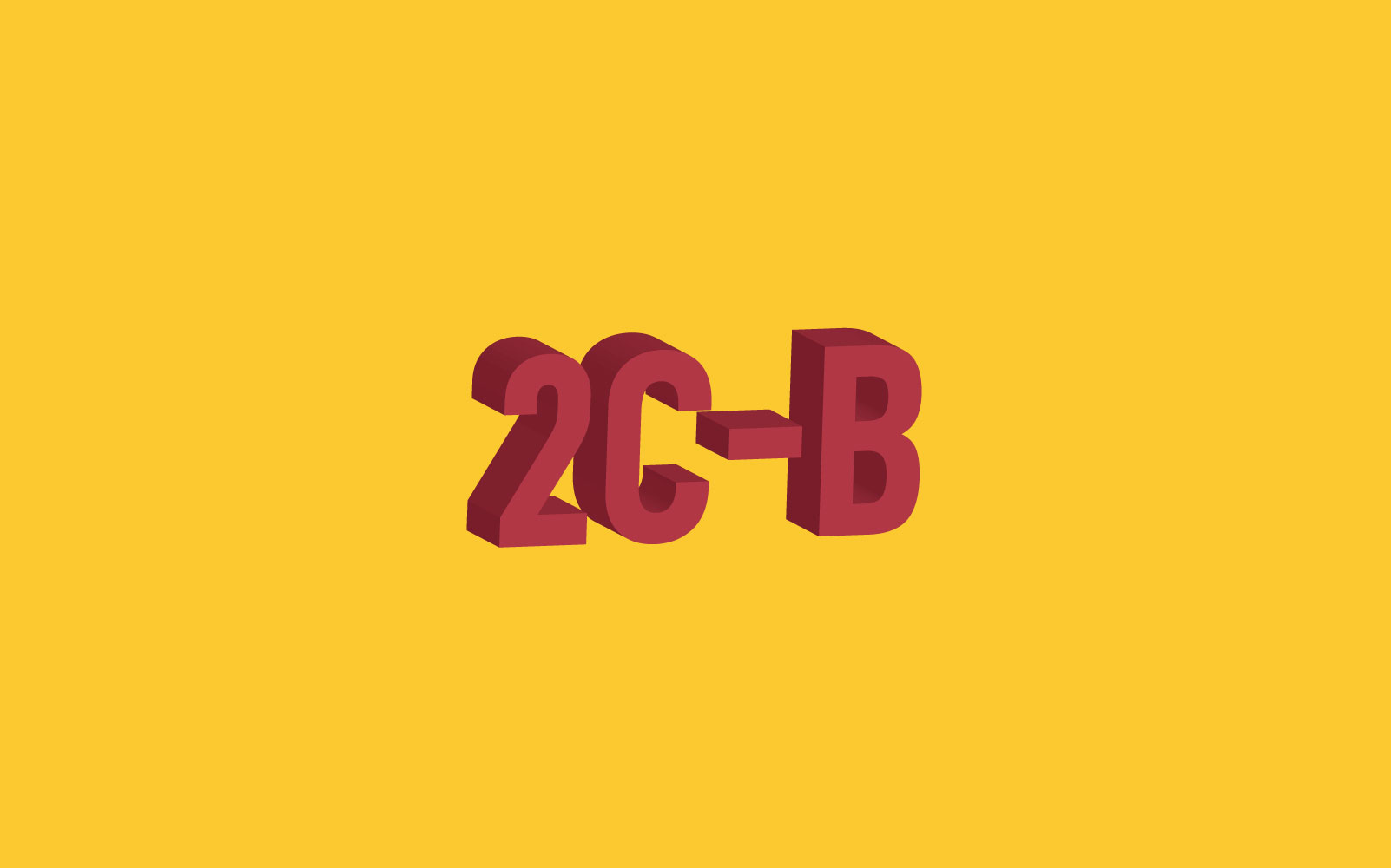 2C-B is a synthetic psychedelic from the 2C family of drugs. Dr. Alexander Shulgin, who popularized MDMA, synthesized most of the drugs in this group in the 1970s and 1980s. He coined the term 2C; an acronym that refers to the placement of two carbon atoms in their chemical structure. 2C-B is one of the oldest and best-known types of 2C drugs that Dr. Shulgin created in 1974. The effects of 2C-B fall somewhere between MDMA and LSD.

Initially introduced as a psychotherapeutic drug in the 1970s, it became known as an aphrodisiac. Little scientific research exists on the 2C class of drugs so we cannot speak about their safety or effects in definitive terms. Nevertheless, 2C-B gained popularity in the past two decades in the electronic music scene as a replacement for MDMA.

What You Will Learn About 2C-B

2C-B is a synthetic drug that can act as an entactogen and psychedelic. It belongs to a group called 2C drugs that Alexander Shulgin developed in the 1970s ad 80s. 2C drugs are a family of synthetic psychedelics in the phenylethylamine class.

Hallucinogens: Psychoactive agents that will most likely cause hallucinations and other subjective changes in consciousness. The most common types are psychedelics, entactogens, dissociatives (such as ketamine), and deliriants (such as belladonna).

5-HT2A receptors: 5-HT is short for 5-hydroxy-tryptamine, which refers to serotonin. Serotonin 5-HT2A receptors are distributed throughout the central nervous system. Several hallucinogens, anti-psychotics, and antidepressants target 5-HT2A receptors. Abnormal activity of these receptors is associated with a number of psychiatric disorders including depression, schizophrenia, as well as drug addictions.

5-HT2A agonists: In order for psychedelics to take effect, they have to activate of the 5-HT2A receptor. Some act as full agonists, others are partial agonists. There are three main classes of 5-HT2A agonists: ergolines (LSD), tryptamine (DMT), and phenethylamines (2C-B). Agonists enhance dopamine (the “happy” hormone) and memory, and they play an active role in attention and learning.

Phenethylamines: These include both natural and synthetic substances that stimulate the central nervous system. A wide range of species produces phenethylamines naturally (humans included). A variety of foods contain phenethylamines such as chocolate, as well as dietary supplements for mood control and weight loss. Phenethylamines are found in serotonergic psychedelics like mescaline and 2c-B but are also present in empathogen-entactogens such as MDMA.

The effects of 2C-B fall somewhere in between MDMA and LSD. In lower doses, 2C-B will be more empathogenic. This means that it produces a feeling of connectedness, emotional communion and openness, and oneness. In higher doses, 2C-B will become more psychedelic. Music can affect the visual experience of 2C-B.

Common Ways to Use 2C-B

2C-B and other 2C typically come as a white powder or in gel caps. One can dissolve the powder in a liquid or “bomb” it, which means to wrap the power in cigarette paper and swallow it. Sometimes 2C-B comes in tablet form. 2C-B can also be smoked and snorted. The reasons for its use are experimental, recreational, spiritual, and in some cases therapeutic.

Alexander Shulgin first synthesized 2C-B in 1974 from 2,5-dimethoxybenzaldehyde. Initially, Shulgin and his colleagues experimented with it as a therapeutic tool. A German pharmaceutical company, Drittewelle, then sold 2C-B commercially as an aphrodisiac under the name “Erox” in the 1990s. Dutch shops sold 2C-B tablets under the name of “Nexus.”

Government officials were relatively unaware of the drug until MDMA was banned in 1985. 2C-B became popular in the club scene as a replacement for MDMA and remained legal until 1994-1995 when the US government classified it as a Schedule I.

NBOMe, pronounced “n-bomb,” is a new class of hallucinogen. Biochemists use this research chemical to map out type 2A serotonin receptors in the brain. Though discovered in 2003, NBOMe has no history of human use prior to 2010 when it first became available over the internet. Typically, NBOMe is sold as an alternative to LSD. However, it is actually derived from the 2C family that Shulgin developed.

The medical community has been studying many illegal drugs–MDMA, marijuana, etc.–since the 1990s. The 2C group remains unresearched. The reasons are a general lack of knowledge, and overdoses that some compounds caused which has fueled a negative attitude towards this class of drugs. Adulterated versions of these drugs might have caused these deaths. That being said, issues can arise from taking too much 2C. Users, however, regard it as a relatively safe drug. Little scientific research exists to substantiate these claims.

Recently, the controversial 2C family received news coverage. There was a tragic story in 2012 about an actor, Johnny Lewis, having had a psychotic episode after taking a 2C drug that resulted in his suicide. The family became known as “Smiles,” which is a name that seems to have been invented by the media. Other cases of tragic outcomes from taking 2C drugs have been reported, but it appears that they were caused by derivatives of these drugs.

Some users mix MDMA and 2C-B, known as a “nexus flip.” The purpose of consuming a nexus flip is to extend the euphoric feeling of MDMA. Users typically ingest 2C-B as they begin to come down from the MDMA. About an hour later, one reenters the experience with the enhanced visuals of the psychedelic.

A threshold dose is between 2-5mg. Typically, users take 11-15 mg. 25mg is considered a strong dose.

About an hour after consuming it, 2C-B tends to start taking effect. On average, it lasts four to eight hours when consumed orally. The comedown is approximately two hours. Snorting 2C-B brings on its effects much faster and can prolong the experience for up to 12 hours.

One user described his experience of taking 2C-B at a punk rock concert:

“2C-B was both mild and intense, depending on the moment…I experienced light psychedelic visuals, moments of paranoia, euphoria, and at one point anger, when an idiot playing pool kept getting in the way of the concertgoers. My body felt warm, electric and sensitive to the touch, and the objects and people I looked at seemed to expand and contract in a moment.”

There have been very few studies done on the 2C class of drugs. Thus, it is difficult to talk about its potential benefits and risks in definitive terms.

As with any other psychedelic, there are a number of factors to consider when thinking about one’s safety. First, set and setting is of utmost importance. As 2C-B has become popular in the club scene, this may or may not be the right setting for some. According to users’ accounts, emotions could be brought to the surface on 2C-B and hallucinations can get intense at higher doses.

If one has a preexisting mental health condition or a heart condition, the drug may put these individuals at a higher risk of complications. Psychosis can be triggered in someone with bipolar or schizophrenic disorder. As psychedelics tend to increase one’s heart rate, they also pose a higher risk of complicating preexisting heart conditions. If one is on any medications, such as SSRIs, consult a physician before taking 2C-B. Avoid other stimulants (prescription or recreational) as they can increase heart rate, blood pressure, and body temperature. Unlike MDMA, 2C-B does not deplete one’s serotonin, and users generally report that an elated feeling stays with them days after the trip has ended.

Specifically, if one is using 2C-B powder, it would be wise to use a precision scale to properly measure how much one is taking. It is always a good idea to test your substances before you use them.

2C-B is illegal. It is a Schedule I drug under the Convention on Psychotropic Substances. Check local laws.

How Long Does 2C-B Stay in Your System?

The length of time that a drug stays in one’s system depends on a variety of factors: dose, metabolism, etc. The effects of 2C-B can last up to twelve hours. Standard and Extended Drug Tests do not check for 2C-B. The detection time in urine is unknown. Some users question whether 2C-B shows up on drug tests as an amphetamine, but this theory has not been proven.

How long does 2C-B last?

2C-B typically lasts about 4-8 hours with a comedown period of two hours.

How long does 2C-B take to kick in?

2C-B feels like a cross between MDMA and LSD but it doesn’t feel like a “candy flip” which is taking LSD and MDMA at the same time. In lower doses, 2C-B is more empathogenic–inducing feelings of connectedness, empathy, and sociability. In higher doses, it tends to be more psychedelic with intense visuals.

How Long Does 2C-B Stay in your Urine?

One user reports that it can be found in urinal/blood tests within 3-5 days after its last use.

Unlike MDMA, it doesn’t.

Does 2C-B keep you awake?

Does 2C-B Make your Pupils Dilate?

It varies from user to user but it tends to dilate pupils somewhat.