Having Sex on LSD: What You Need to Know Sex on LSD can be a life-changing and wonderful experience for many. It is certainly an intriguing experience for most psychedelic users. As a matter of fact, the combination of an endorphin’s natural high released in the brain and the stimulation of the psychedelic itself now interests scientists, too.

The study of MDMA‘s use during sexual behavior is helping us understand the effects of LSD during intercourse better. This is because both drugs seem to affect sexual sensations in similar ways.

Indeed, a study on ecstasy users’ perceptions about sexuality and sexual risk showed that most users reported feelings of emotional closeness while consuming MDMA, but without the desire for penetrative sex.

What to Expect With Sex on LSD

Having sex releases endorphins. These endogenous hormones act not only as natural pain relievers, but as a stress reliever. While endorphins are often nicknamed “love hormones” because of their ability to make people “glow” and feel good, LSD produces very similar effects.

People taking LSD while having sex may generally expect to feel even more comfortable, and have enhanced sexual pleasure. Moreover, LSD may cause heightened awareness, resulting in greater sensitivity and more intense experience.

One of the main reasons people are drawn to use LSD for sexual activity is its ability to enhance sensory experiences. LSD is a powerful psychedelic drug. It can therefore amplify your surroundings, making your experiences more intense.

For this very reason, the touch of a sexual partner might simply feel better. Similarly to ecstasy, LSD heightened sense of physical touch. As a matter of fact, a study which was published last year proved that MDMA enhances pleasantness of affective touch.

LSD’s capacity to lowers users’ inhibitions is another reason for its popularity for sexual activity. LSD can contribute to users being in a state of utter relaxation.

During the 1960s and 1970s, psychiatrists would sometimes administer MDMA and LSD to their patients in order to help them respond better to therapy. As the patients’ inhibitions were lowered, their psychotherapy was facilitated. Studies around MDMA and LSD are still conducted today and are being research for use in couples’ psychedelic therapy.

Lowered inhibitions often result in a person being able to talk more openly and honestly. During sex, this can undeniably help communicate to a partner what you might like and not like without feeling embarrassed.

Dissolution of Boundaries of the Self

Many people report feeling more connected to the other person with them while under the influence of LSD. This is supported by brain scans describing people feeling at one with the universe while on LSD.

Research has shown that LSD reduces your sense of integrated self. This explains why people who take LSD and have sex might feel a sense of connection to another person. They may not feel this as easily when sober.

LSD may also cause a sense of dissolution of boundaries between individuals. This can make the sexual experience more intimate, emotional, and profound.

LSD is a hallucinogen. Because of this, the drug may cause a distorted perception of time and space. Moreover, a person under the influence might feel like pleasure from sex might last longer than it normally would.

A study from 1954 found that many LSD users felt a “sense of temporal insularity,” where only the present was real and the past and future were far, far away.

Just as with a lucid dream, seconds might feel like hours or even the opposite. This results in LSD users not feeling pressured to watch the time and feeling stress.

Is It Safe to Have Sex on LSD?

Despite all the positive sensations people might feel while on LSD, engaging in sexual activity while under the influence has its risks.

Lowering inhibitions also means statistically reducing regular safe sex practices. Because of the difference in experiencing the world on LSD as you would sober, you are less likely to practice safe sex—or to even think about safe sex practices.

Because the drug can lower your inhibitions and change how you see reality, it might be easier to act out sexual fantasies. Lower inhibitions can also cloud your judgement about safer sex.

You might also feel like you could trust a stranger, and put yourself in a dangerous situation with potentially harmful consequences. With these caveats, sex on LSD should be safe as long as you plan to trip with a person you know you can trust—no matter what.

“Receiving oral sex felt highly connecting and the visual of watching it was intense and arousing, although I was not approaching climax during the encounter.” —Max

“No lie, a rainbow shot out of my dick, and it had a sound with it.” —A$ap Rocky

“For the first time, under LSD I had found pleasure in sex, rather than terror and pain.” —Constance Newland

“I was filled with energy at a deep, cellular level. My movements were in sync with my heartbeat and my heart was in sync with hers. And it felt like everything was building and building …” —Robbie

“I orgasmed within a few minutes, quicker than usual, and the experience was intense.” —Lisa

“Each sensation was new, each crevice felt unexplored, each thrust seemed synced with our breath, each cell of my body was aflame. There was not a shred of anxiety, insecurity or inhibition; there was no ego, no expectation.” —Vice testimony 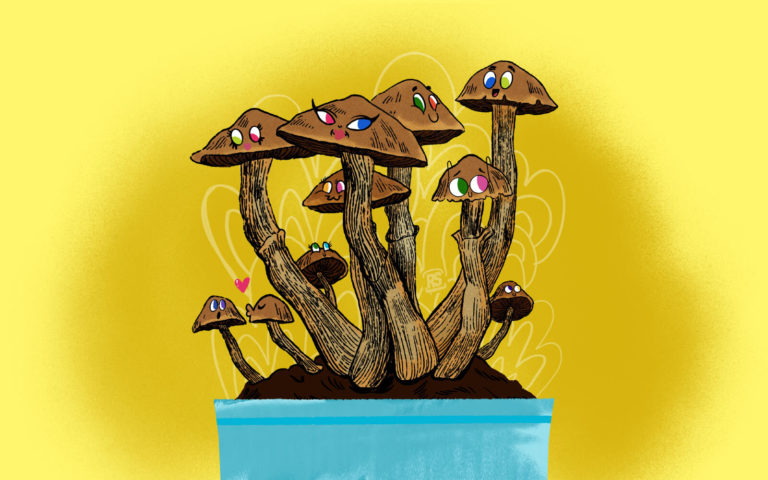 Guide to Cooking with Magic Mushrooms

From cookies to smoothies and sandwiches, we cover various methods of cooking with magic mushrooms for the ultimate snack.