How to Intensify a Mushroom Trip 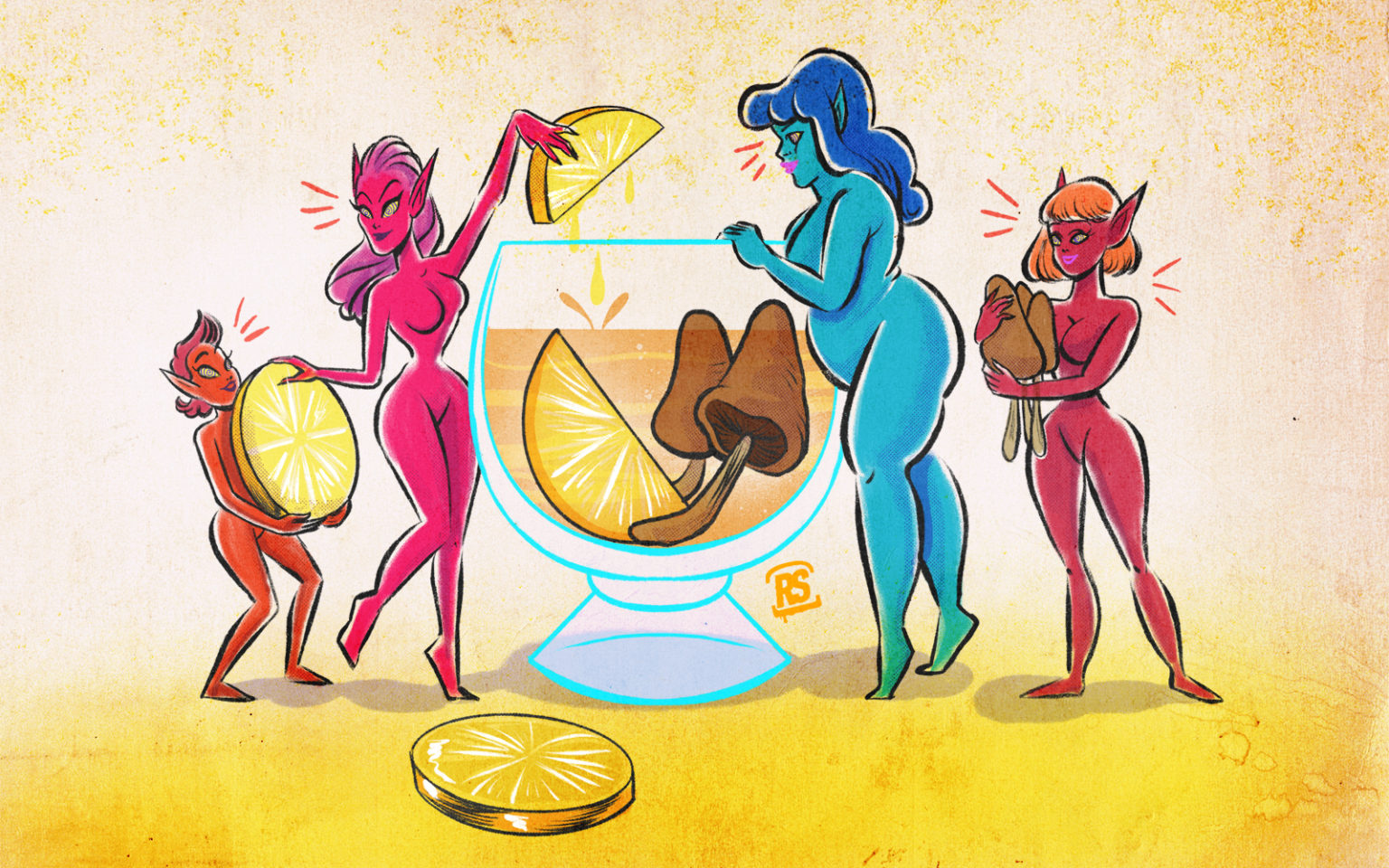 Psychonauts have been experimenting with ways to intensify trips since they started experimenting with psychedelic substances. There are myths, anecdotes, and online forums full of ways to supposedly increase the intensity, duration, and quality of a mushroom trip. And of course, very few, if any, have been proven by science. That doesn’t mean they are worthless. It just means scientific institutions haven’t put them to the test. But after decades of experimentation, a few things have come to the forefront as ways to intensify a mushroom trip.

Weed and mushrooms seem like a natural pairing. They are both from the earth and have a long history of hippie influences. Combining cannabis with any psychedelic has become a popular way to adjust the trip to the user’s liking.

The most common way to mix mushrooms and cannabis is during the initial dosage. Mushrooms can be hard on the stomach, so some people will use weed to ease nausea. Others use it for its relaxation and anti-anxiety effects. Waiting for a trip to kick in can be stressful. Cannabis can reduce this and put the user in the right frame of mind before the trip begins. Inhibitions are lowered, making it easier to fall into the psychedelic world.

The most common time to take a hit of a joint during a trip is during the come-down. This is around the five or six-hour mark of a psilocybin trip. Users report that smoking cannabis during this phase can bring back the intense visuals and euphoria during the peak. It elongates the trip’s intensity, so be careful of smoking if you have decided you no longer want to be tripping.

Psychedelic mushrooms have two chemicals that activate the trip in the brian, psilocybin and psilocybe. They are considered “uppers” or stimulants and work on the 5-HT2A–serotonin receptor on the GABA neurons causing hallucinations and euphoria. Cannabis, a downer, works on an entirely different set of neuron receptors, cannabinoids. It is the activation of these receptors, causing the euphoria, relaxation, and sometimes paranoia associated with getting high.

And while they work on different receptors, both cannabis and psilocybin indirectly increase dopamine in the brain intensifying visuals, euphoria, and other sensations. But scientists don’t know exactly how these two compounds interact.

Lemon tekking is another one of these urban myths of how to increase a trip’s intensity, but this one has a little more understood scientific backing. While of course, still not being tested in a laboratory environment. Lemon tekking is letting the mushrooms soak in a citric acid juice like lemon or lime for 15 or 20 minutes before consumption. Make sure you drink the entire juice/mushroom concoction! According to psychonauts, doing this makes a mushroom trip more intense, shorter, and decreases nausea.

This soaking means the come-up is a lot quicker, cutting down from about an hour to between 10 and 45 minutes. The mushrooms are already partially digested so the psilocybin can enter the bloodstream much more quickly. It also means the trip itself will be shorter, more like four hours rather than six. The time it takes to digest the raw dried mushroom acts as time-release, dripping psilocybin into the brain over the course of a few hours. So the quick release Lemon Tek method can feel much more intense. You are also creating a mushroom/lemon extract with a higher concentration of psilocybin per gram and so maybe consuming more than you would normally, intensifying the trip.

Adding orange juice to your mushroom trip uses the same theory as lemon tekking, except you do the soaking inside your stomach instead of before consumption. The citric acid should help digest the mushroom, soothing your stomach, and have you peaking faster. But it won’t be as intense as lemon tekking before you consume. While first-time trippers should probably not lemon tek, it is fine for a beginner to drink a side of OJ with their first mushroom. It is also common to enjoy fresh fruits while tripping on mushrooms, so drinking OJ when you are already tripping can be an enjoyable experience with or without the citric acid benefits.

Set and setting are crucial for any trip and can actually help intensify psychedelic feelings and visuals. You can ‘trip out’ on interesting lighting or artwork. The feeling might be extremely intense while looking at the stimuli but dissipate if you move to a different environment or stop focusing on it. Music can also be a powerful trigger for mushrooms. Music genres, such as psytrance, market themselves as complimentary to psychedelics, but personal preference is much more important.

Obviously, the most straightforward way to intensify your trip is to simply take more mushrooms. Developing a tolerance or even a cross-tolerance to psilocybin and other psychedelics is very well documented in scientific literature. If you are taking a lot of psychedelics, be prepared to need more to reach the same level of high. Taking high amounts of psychedelics repeatedly or mixing drugs can lead to Hallucinogen Perception Persisting Disorder (HPPD). The condition causes lasting visual distortions even after the drugs have left your system. It affects an estimated 0.12 to 4.2 percent of psychedelic users.

How much of a drug you take and how intense you want the psychedelic experience should always be a personal choice. Don’t let someone force you into taking more than you feel comfortable with. If you are testing out one of these intensifiers, start with a smaller dose than normal to be safe. And get your mushrooms and weed from a reliable source.

Bad trips can be scary, but there are ways to get through them if you have taken too much psilocybin and no longer feel comfortable. If the trip becomes too intense, go to an environment where you feel safe, listen to relaxing music, and talk it out with someone you feel comfortable with. Try to meditate and focus on your breathing.

Disclaimer: Psilocybin is potentially categorized as an illegal drug. Reality Sandwich is not encouraging the use of this drug where it is prohibited. However, we believe that providing information is imperative for the safety of those who choose to explore this substance. This guide is intended to give educational content and should in no way be viewed as medical recommendations.

If you have relevant information or updates concerning the research and studies of psychedelic substances, please reach out to [email protected]. We appreciate your contribution.

Jesse Klein is a science and outdoor reporter based in the Bay Area. She has written for VICE, New Scientist, Inside the Jar and many other national publications. Her background in neuroscience and experience as a business journalist informs her reporting as she dives deep into the science, policy and business of drugs and psychedelics. See more of her writing at jesseerynklein.com.

1 thought on “How to Intensify a Mushroom Trip”

Have you ever wondered about sex on DMT? Learn how the God Molecule can influence your intimate experiences.