Looking Across the Event Horizon and into the Singularity (all images are still shots from the video) There are two parallel event horizons that we, as individuals and as a species, look toward with terror, dread, fascination, and hope. One can be called “eschaton” –a final, culminating event for the species as we know it—variously seen as apocalypse, rapture, a transhumanist singularity where we are supplanted by AI or achieve immortality by hybridizing with AI, or where we transcend our current limitations in a quantum evolutionary shift that happens in ways that may not only be stranger than we think, but stranger than we can think.

People have always thought, and still think, that this collective event horizon is imminent and likely to arrive in their lifetime. Whether or not we will live to see it, we are all hurtling toward our parallel  guaranteed individual event horizon/ singularity  popularly known as “death.”

The Singularity Archetype is not merely a pattern, but a living agency that mediates our expectations and passage across these parallel event horizons.

The exponential growth of resuscitation technology and the field of near-death experience research reveal that many visionary expectations of evolutionary metamorphosis of our species are phenomenological ( and also sometimes highly evidential) actualities during some NDEs and other non-ordinary experiences. WINS is the oldest all-news radio station in the world, continuously broadcasting since 1965 out of New York City where I grew up. Their promotional slogan is forever seared into my mind: “Give us twenty-two minutes and we’ll give you the world!” I’ve got an alternate deal for you: give me an hour and fifty-five minutes and we will look beyond this world and across the event horizon on a journey into the singularity archetype and what it reveals about our individual and collective metamorphosis. Ready to enter the rabbit hole? Press play to see the video. Alternatively (or additionally) you could read this very dense  synopsis of what the Singularity is:

War, man-made environmental destruction, money and financial upheaval, most forms of violence, art, culture, science, the election of Trump, the standoff with North Korea, romantic love and many other phenomena all derive from a single source: the human psyche.

As empirical, cross-cultural evidence demonstrates, the human psyche is not born as a blank slate but with powerful, universal predispositions called “archetypes.”

Archetypes, such as the hero, trickster and devouring mother are often misunderstood as merely cultural motifs, but they are not merely patterns, they are subjects rather than objects that can be said to have their own intentions. Archetypes are dynamic living agencies which exert a dominant influence out of which the essential themes of individual and collective human life emerge.

In 1978, in the course of writing a philosophy honors paper entitled, “Archetypes of a New Evolution,” Jonathan Zap discovered a previously unrecognized archetype he calls the “Singularity Archetype.”

The Singularity Archetype is a mediating influence and source of information about two great parallel “event horizons” humanity is hurtling toward. The first of these is “eschaton” —- a shattering, rupture-of-plane, experience for the entire species conceived of variously as apocalypse/rapture by some religionists, and “the singularity” by some technological futurists. It is a zone of metamorphosis that has haunted the human imagination from time immemorial with images of extinction and/or quantum evolutionary rebirth. The second great event horizon is the eschaton of the individual human timeline known as death.

The themes of evolutionary transformation of the species implicit in the Singularity Archetype become phenomenological actualities in many near-death experiences and certain other boundary-dissolving states such as pychotropic experiences, OBEs, dreams and reported abduction experiences.

Just as the individual event horizon of death may be viewed as emergency or emergence, so too is the collective event horizon viewed variously as extinction-level event or evolutionary emergence.

The Singularity Archetype governs the expectations and mediates the actuality of what we experience crossing both of these parallel event horizons. By studying many manifestations of the Singularity Archetypes, dynamic themes emerge that inform us of the possibilities that may actualize as we approach either of these event horizons. These themes include:

Telepathic consciousness and communication may be networked amongst a group or larger collective while individuality is conserved. (E.G. certain ayahuasca circles, Bene Gesserit Reverend Mothers in the mythology of the Dunebooks). In alternate visions, individuality is subsumed into the telepathic collectivity (E.G. the Borg of Star Trek mythology, and certain eastern and New Age versions of “oneness.”)

Emergence into a thought-responsive/ideoplastic matrix.

Manifestations of the Singularity Archetype include dreams, motifs and themes found in art, science fiction and fantasy literature and films, religious cults, and the paranormal, especially near-death experiences and UFO/visitor encounters.  The most common visual motifs are uncanny eyes and spirals (a spiral with an eye at the center is an efficient symbol of the Singularity Archetype).

The Singularity Archetype is viewed apocalyptically by the ego, and as a transcendent evolutionary event by what Jung called the “Self (the totality of the psyche).

How the Archetype Manifests (a Composite Picture)

A rupture-of-plane event occurs, usually threatening the survival of the individual and/or species. The event is a shock that disrupts the equilibrium of body/physical world and also individual/collective psyche. It is an ontological shock that will be viewed as the worst thing possible by individual/ collective ego.

There is another rupture of plane that may actually be the same rupture as above but seen from a cosmic rather than a personal view. The shock is revealed to be a transcendent evolutionary event. The revelation of the transcendent aspect will often involve spiral motifs and unusual lights. Consciousness and communication metamorphose and with them core aspects—ego, individuality, connection to linear time, corporeality, gender identification, social order, etc.—fundamentally transform. There is a vision or actualization of release from some or all limits of corporeal incarnation and the emergence of “glorified bodies,” which have enhanced powers and various degrees of etherialization. More visual and telepathic modes of consciousness and communication emerge, and this is part of a transformation of individuality into “Homo gestalt”—a new species where individual psyches are networked telepathically.

As with encounters with all archetypes, individuals and groups will attach idiosyncratic material to it, such as particular end dates and scenarios. But the Singularity Archetype cannot be located in linear time and is not reducible to a premonition of particular outcomes or predetermined futures. It could, however, be viewed as a “strange attractor,” a not fully formed pattern associated with the future that is affecting individual and species in past and present. Another way of defining the Singularity Archetype (in its collective form) is as a resonance, flowing backward through time, of an approaching Singularity at the end of human history.

The Singularity Archetype is a critical point where transformation, in ways impossible to fully anticipate, will greatly shift human consciousness and therefore the nature of “reality.” From an ordinary, grounded human perspective, this Singularity may be perceived as apocalyptic extinction. From a more cosmic perspective, the Singularity is revealed as a transcendent evolutionary threshold.

Note: The summary is necessarily dense, but my book on the subject, Crossing the Event Horizon—Human Metamorphosis and the Singularity Archetype is far more readable. In addition to what’s outlined in the summary:

The evolutionary origins of the ego and its metamorphosis as it approaches either event horizon are explored.

Evolutionary theory, which relates to the Singularity Archetype through a number of dynamic paradoxes, is discussed.

Many popular books and movies are analyzed as permutations of the Singularity Archetype, including: Avatar, Childhood’s End, Village of the Damned, Powder, and 2001: A Space Odyssey.

Read or listen to the first twenty-five pages: Crossing the Event Horizon—Human Metamorphosis and the Singularity Archetype

Special thanks to  my Bernadette Salem for creative videography and webmaster extraordinaire Tanner Dery who helped salvage this still technically flawed video and get it online. 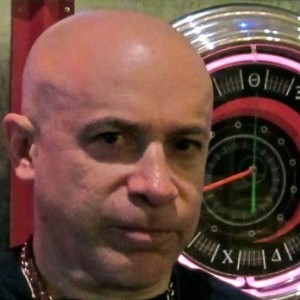