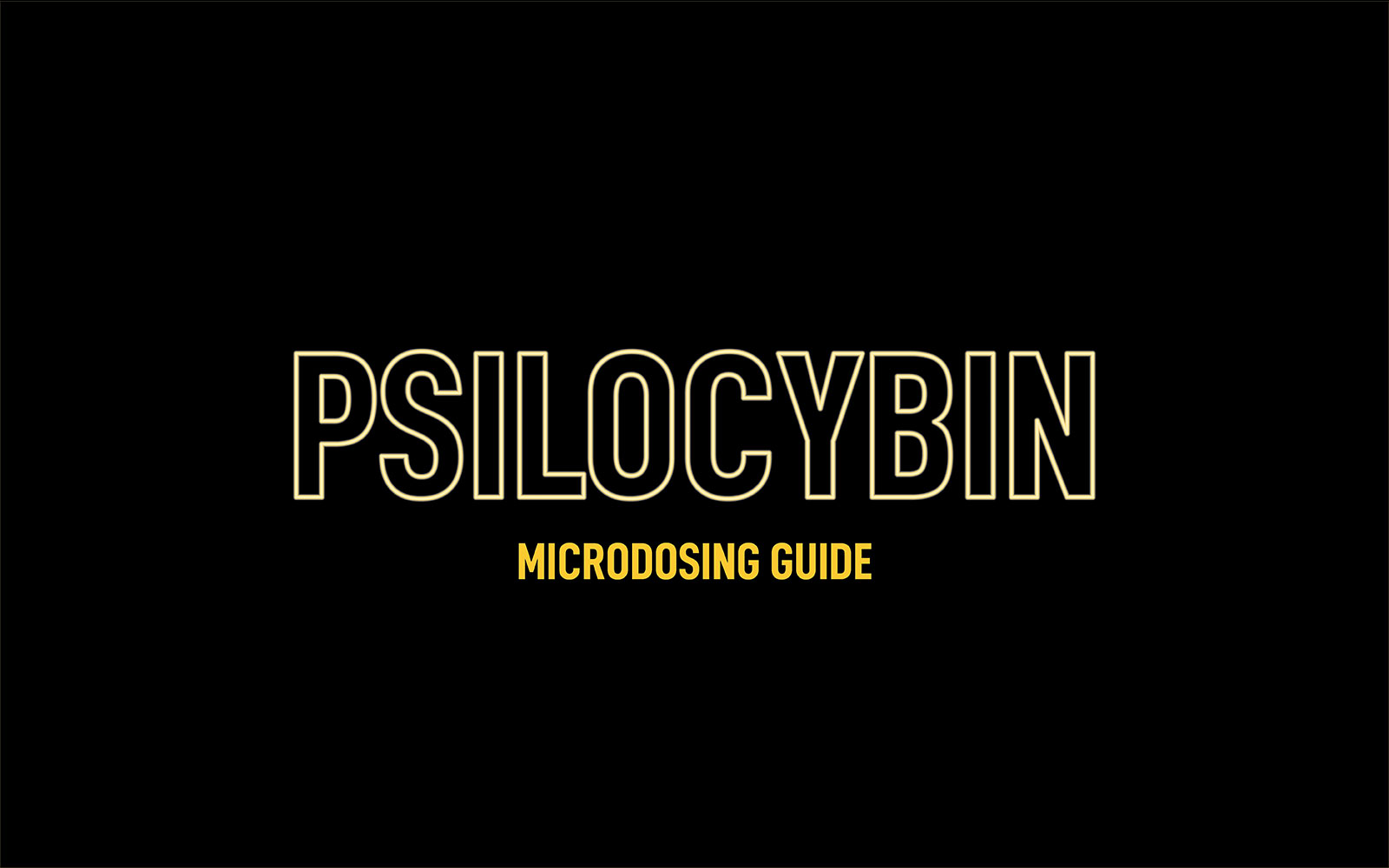 Microdosing psilocybin has quickly picked up the attention of the psychedelic community and mainstream media at a rapid pace. Throughout the past few years, a wide variety of individuals have tried microdosing to help alleviate their symptoms of depression and anxiety or improve their productivity and overall well-being. When microdosing, a user takes a sub-perceptual amount of a substance. For a psilocybin dosage, Dr. Fadiman recommends taking 0.2 grams of dried psilocybin mushrooms once every third day to start. That way you have a baseline day to determine whether or not microdosing is effective for your specific situation.

How are Psilocybin Doses Measured

Typically, psilocybin doses are measured in grams. The most common type of psilocybin mushroom is Psilocybe cubensis which contains approximately 0.6% psilocybin when dried. This means every gram of P. cubensis contains 6 mg of pure psilocybin. Most users grind up the dried mushroom then put them in size 00 capsules to avoid the bitter taste that these mushrooms have.

Level 3 includes visuals with warped kaleidoscope-like patterns, mild hallucinations, three dimensional closed eye visuals, minor synesthesia, and a distorted sense of time. The 4th level includes effects such as heavy hallucinations, splitting of the ego, mild loss of reality, complete loss of time, synesthesia, and out of body experiences with ESP. type phenomena. Level 5 involves a heavy dose that will cause effects such as a total loss of regular senses, total loss of ego, and a complete loss of reality. At this level, a common description is that the universe ceases to exist for a person, making it hard to put into words.

The Mental Health Clinician conducted a meta-analysis of all studies on psilocybin from 1999 to 2008. This meta analysis found clinical doses ranged from 25 micrograms per kilogram to 420 micrograms per kilogram. For an average adult weighing 70 kilograms, or about 150 pounds, this would be a dose between 1.75 milligrams to 29.4 milligrams. Going back to our average amount of psilocybin contained in dried P. cubensis of 0.60%, this would be 0.3 grams to 4.9 grams of dried mushrooms.

How Much Psilocybin Causes an Overdose?

Toxicity levels of pure psilocybin are relatively low in comparison to other common substances. Studies conducted on rats found that the level of toxicity to be even lower than that of caffeine. Cases of overdoses due to psilocybin alone are also extremely rare. As of 2011, there were only two cases of overdoses caused exclusively by psilocybin mushrooms.

A measure was also developed by the Registry of Toxic Effects of Chemical Substances called the Therapeutic Index (TI). This measures the relative safety of a substance in comparison to the dose required to receive therapeutic effects. Higher values indicate that the substance has a higher safety profile. Psilocybin has a therapeutic index of 641. This is a high value compared to commonly used substances such as aspirin or nicotine which have a value of 199 and 21 respectively.

The act of microdosing is when a user consumes a sub-perceptual dose of a psychoactive compound. Advocates of microdosing believe consuming an extremely small dose of a psychedelic substance brings some of the positive effects of the substance while still allowing the user to remain fully functional to carry on with all of the activities of a standard day. Typical dosages are somewhere around a tenth of the amount of a standard dose.

When it comes to microdosing, there is very little history in regards to scientific studies surrounding this method of consumption. The history behind microdosing is very unclear, but it is known that Albert Hofmann, the chemist who discovered LSD, began microdosing in the later parts of his life during the 1990s. Prior to the 1966 prohibition on psychedelic research, no formal studies were conducted on microdosing. There has been some progress made in starting the process that will allow researchers to study microdosing in a formal setting. Some scientists are trying to make their case through congregating user reports while others are doing initial clinical trials to determine the safety of studying microdosing.

People try microdosing for a variety of reasons. Some microdose to alleviate the symptoms of their mental illnesses such as anxiety and depression, while others are trying to increase their productivity and creative problem-solving abilities.

What is Considered a Microdose of Psilocybin?

A microdose is considered a sub-perceptual dose, meaning it does not produce any acute effects. When a user microdoses they will not feel any effects kicking in or feel as though they are “high.” Most users microdose psilocybin to help alleviate their symptoms of depression and anxiety, and improve both convergent and divergent thinking performance. A study from 2018 showed preliminary results that back up the claims surrounding convergent and divergent thinking. Typical microdoses are a tenth of a normal dose. Dr. Fadiman, a strong advocate for microdosing and psychedelic research, recommends a dosage of 0.2g of dried mushroom once every three or four days.

What the Community Says about Microdosing Psilocybin

The psychedelic community strongly believes microdosing psilocybin should be further studied for its potential therapeutic benefits. A wide range of reports that exist that include anecdotal reports of individuals regularly microdosing with psilocybin.

One of these reports involved a person suffering from Bipolar II and PTSD looking for a solution to their seasonal depression. After trying a wide range of medications and therapies, they eventually tried microdosing with a full understanding it could increase their levels of mania. They found taking 0.2 grams every fourth day highly increased mania, so they cut back the regularity and dosage to 0.15 grams every other week. This new schedule helped them better manage their seasonal depression even going as far as stating, “it was the first winter I’ve ever had where I wasn’t depressed.” Another user suffering from depression reported that they “felt more capable, emotionally resilient, faster in mental/emotional recovery, and a much-improved ability to choose other actions.”

What Scientists Say about Microdosing Psilocybin

As of November 2019, there are very few rigorous, scientific studies on the effects of microdosing psilocybin. This is largely due to the regulations surrounding the study of psychedelic substances. However, scientists have collected anecdotal evidence to support their desire to further study the potential benefits and risks of microdosing. One study interviewed 21 individuals microdosing psilocybin mushrooms on a regular basis. This study found that the users reported “mostly positive consequences” with effects including an improved mood, cognition, and creativity.

Dr. James Fadiman is another scientist collecting anecdotal information to show why microdosing should be further studied under rigorous scientific standards. He is actively collecting reports from anyone who has microdosed in the past or is currently doing it.

What the Critics say about Microdosing Psilocybin

There has been widespread growth in the attention that microdosing has received in recent years. This has led to critics pointing out potential downsides as the practice becomes more and more common. A large amount of these criticisms base their claims on a study conducted on microdosing DMT with rats. The study found that microdoses of DMT affected the metabolism of male rats resulting in weight gain. It also found that female rats had developed neuronal atrophy. The other common criticism of microdosing psilocybin is its potential to cause an upset stomach which is a common side effect of psilocybin mushrooms.

Where do I Buy Psilocybin to Microdose?

What to Know Before Microdosing Psilocybin

One of the most important aspects of microdosing is ensuring a consistent dosage. Dosage refers to the dose of the substance as well as the time-frequency and duration that the doses are taken. A microdose is such a small amount that it is easy to accidentally consume a larger dose than expected. Psilocybin mushrooms make this even more difficult due to the varying strengths of the different species and individual mushrooms. One example of this can be seen in the differences in potency between the cap and stem of psilocybin mushrooms. A study analyzing psilocybin mushrooms in Japan found that the P. cubensis had a maximum potency of 1.27% in the stem and 1.35% in the cap. This study also showed whole mushrooms had a potency ranging from 0.37% to 1.30%.

Furthermore, as Dr. James Faidman and user reports suggest the frequency with which you microdose plays a role in its effects. Dr. Faidman prescribes a microdose every third day, but individuals have experimented with different dosages as well.

Common effects of microdosing psilocybin include:

How to Microdose Psilocybin

In the psychedelic community, microdosing psilocybin means consuming a very small dose of psilocybin mushrooms every third or fourth day. Typical doses range from 0.10 grams to 0.25 grams of dried P. cubensis mushrooms. Most users will pulverize the mushrooms into a powder, weigh out doses, then store those doses in size 00 capsules for later use.

Paul Stamets created a unique microdosing technique he calls “stacking.” It involves a combination of niacin, Lions Mane, and P. cubensis. This method combines approximately 0.1-1 gram of P. cubensis, 5-20 grams of Lions Mane, and 101-200 milligrams of niacin. His belief is the niacin enhances the effects of the psilocybin while reducing the psychedelic experience.

How Psilocybin Works inside the Body

Psilocybin is a serotonergic substance meaning it acts on the serotonin, or 5-hydroxytryptamine, receptors in the central and peripheral nervous system. The primary receptors it acts upon are the 5-HT2B and 5-HT2C receptors. It also activates the 5-HT2A receptors with slightly lower activity. The activity at these receptors causes an increased concentration of dopamine at the basal ganglia. This is responsible for the euphoric and psychedelic effects of psilocybin.

Small doses of psilocybin, referred to as a “microdose,” do not produce any acute effects, but rather a psychological and social benefit from regularly consuming microdoses. These effects include increases in:

Psilocybin, along with most other psychedelics, causes vasoconstriction. This means mixing it with other vasoconstrictors can cause unpleasant and potentially dangerous effects. Mixing psilocybin with any MAOIs can enhance its potency which could cause a microdose to produce stronger effects than expected. Alcohol mixed with psilocybin mushrooms can place unnecessary stress on the liver since they are both metabolized by it.

The primary safety concern with microdosing psilocybin is alterations in heart rate. Using psilocybin with a pre-existing heart condition can cause tachycardia or bradycardia.

Is it Legal to Microdose Psilocybin? Spotlight: The Psilocybin Solution: The Role of Sacred Mushrooms in the Quest for Meaning