The Many Lives of Mongolian Shamanism

The following is excerpted from Sky Shamans of Mongolia: Meetings with Remarkable Healers by Kevin Turner, published by North Atlantic Books.

Is heard close to the abyss,

Unifier of the thoughts of the Mongols.…

Ruler over many clouds,

For thousands of years, Mongolia has been a nexus of Eurasian shamanisms that competed, mixed, and meshed across our planet’s largest continent. Shamanism appears to have emerged with the very dawn of human consciousness, but archeologists can probably speak with confidence about only the past 30,000 to 70,000 years.

Archeological discoveries in Eurasia alone indicate that the practice of shamanism reaches back at least to 35,000 BCE, easily making shamanism the oldest spiritual practice known to mankind. Modern religious faiths such as Buddhism and Christianity are toddlers in comparison, and psychology is a mere newborn.

Although shamanism has bordered upon being a state religion in Mongolia in the past, it is more a collection of practical spiritual methodologies than a religion in the usual sense. It has no holy books, scriptures, nor required belief systems. Shamanism involves direct contact with, and direct revelation from, spiritual realities—and practical tools for working with the spiritual aspects of our ordinary realities.

From our earliest beginnings, shamans have assisted in humanity’s survival by performing healings and divinations (the gathering of information by nonordinary means, through either direct ecstatic revelation or inductive methods such as casting or reading signs). Shamans frequently make use of unfamiliar and symbolic language to describe their work in subtle realms. One may perhaps need to become a shamanic practitioner oneself to fully appreciate this at depth; I will discuss this in later chapters.

As peoples settle and civilizations rise, those who may not have experienced direct access to spiritual realities tend to develop beliefs about what shamans do, or did long ago. These are often systematized into fixed concepts that may be passed on for centuries. Direct perception of other realities declines into mere belief, and spirituality devolves into religion. Then, often due to political expediency, religious concepts may become enforced belief systems, resulting in the many misunderstandings we suffer today.

The word shaman originated from the Tungusic tribal language groups (from areas to the north and east of Mongolia), which are related to Mongolic languages. These are both part of the broader Altaic language group, which includes Turkic, Manchurian, and scores of other Inner Asian and Siberian languages, and may include Korean and Japanese at the easternmost reach. The modern term “shaman” has now been adopted by many as a catch-all word to describe those who by spiritual means seek direct access to information and healing power not ordinarily available. The definition and use of the word “shaman” has been widely debated, and I will address this issue in a later chapter.

Among early tribal groups and even early civilizations, the shaman and the chieftain were often one and the same person. Early Chinese emperors were both shamans and kings, earning the eventual title “Son of Heaven,” which may have implied a direct, conscious connection to extraordinary realms of consciousness. In the second century CE, Himiko, Japan’s early empress, was a shaman-mystic who led her area of Japan through its longest period without war. Perhaps the original intention of the Roman Catholic papacy was similar—creating a mystic sovereign with a direct line to guidance from the heavens. However, Frank J. Lipp points out that by the time of the Zhou Dynasty (1,045–256 BCE) the roles of shaman and emperor had been well differentiated in China.2

The nomadic northern Siberian shamanic traditions tend to retain the highly individualistic aspects of shamanism; by contrast, a most interesting facet of Mongolian and Inner Asian shamanism is the amalgamation of the shamans’ direct experiences of other realities with a religious belief system known as Tengerism (Heaven- or Sky God-ism). Tengerism originated in Sumeria, one of humanity’s earliest civilizations, and probably derived from the early experiences of the shamans, prophets, and mystics of pre-Mesopotamian eras.

The modern Mongolian term Tenger (or Tengri), meaning both “sky realms” and “sky spirits,” almost certainly derives from the Sumerian word Dingir, also meaning both “sky realm(s)” and “deity(-ies).” The concept of divinity in Sumerian was closely associated with the heavens, evident from the shared cuneiform sign for both heaven and sky, and from the fact that its earliest form is a star shape. The name of every deity in Sumerian is prefixed by a star symbol (see illustration).

Mircea Eliade proposed that Tengrism may be the closest thing we have found to a reconstructed proto-Indo-European religion. It is also evident that Tengrism’s three-layered worldview is nearly identical to the tripartite world found in many kinds of shamanism, as well as the Vedic triloka (“three realms”) world structure. 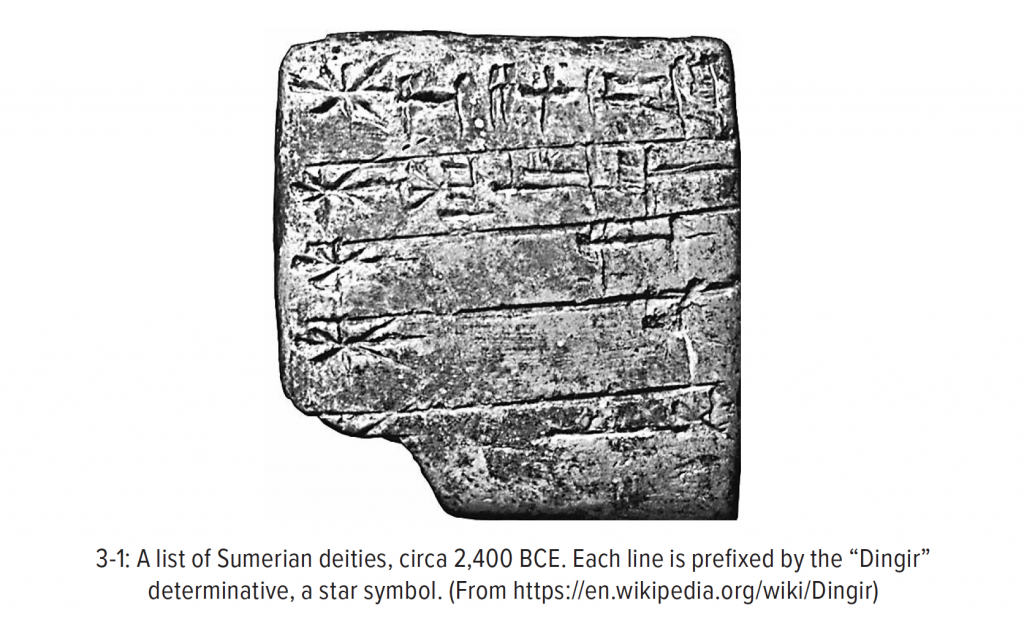 In Sanskrit, tan can mean “shine; extend; reach toward,” and gr means “call out to; invoke.” Tangr, Dingir, and Tenger can easily be recognized as cognates. The word for “heavens” is tien in Chinese, and ten in Japanese. Teng in Tibetan means “above.” Even in Islamic texts in the Uighur script (from which Chinggis Khan created the Mongolian script), the name of God/Allah is Tengri. We may indeed be seeing evidence of an archaic pan-Eurasian spiritual outlook.

The early spread of sky-deity concepts from Sumeria eastward to the shamans of Inner Asia occurred in waves, extending over millennia. One link may be found in Zoroastrianism, the Persian faith that was eventually adopted by the Assyrians, successors to the Sumerians.

Zoroastrianism spread into Central and Inner Asia, possibly bringing with it the concepts of the Dingir/Tenger sky gods from yet another direction further south. Living among the Mongols were a significant number of descendants of the Zoroastrian refugees who had fled Muslim persecution in Persia, beginning in the seventh century, to settle in Western China and Mongolia. The word magi (from the Old Persian magus, denoting a follower of Zoroaster) later gave us the terms “magic” and “magician” (later translated into English in the New Testament as “wise men from the East”). Mary Boyce suggests shamanistic aspects in Zoroaster’s activities, and notes that terms for soul journey or spirit journey appear in Zoroastrianism.3 The word zora in the modern Mongolian language means “to prophesy.”

In Mongolian, one who travels the realms of the Tengers is called a Tengeri—“sky-dweller; sky-walker.” I like to think that Luke Skywalker, the young warrior-shaman Jedi knight of the fictional Star Wars films, may have inherited his name from this tradition. Interestingly, the BBC reports that in censuses taken in 2001 regarding spiritual beliefs, hundreds of thousands of people selected “Jediism” as their faith of choice—such is the power of shamanism even in our modern myths and legends.

In our discussions regarding the various realms and deities, shamans in Mongolia described these using the same vague term—Tenger. There seemed to be no differentiation in word usage between the realm and the deities. The concept of Dingir, Tenger, or “heavenly sky forces” is not a new one; it also worked well for shamans on the steppe of Inner Asia.

The Tengers were divided into White and Black. White Tengers came to be known as all-knowing, all-compassionate inhabitants of the Western part of the Upper World, akin to deities, while the fierce, ethnocentric Black Tengers, often invoked for power or vengeance, were seen as being from the Eastern part of the Upper World. Thus came into being the pan-Mongolian cosmology of the Ninety-Nine Skies (realms) of the Upper World, with fifty-five White Tengers in the West and forty-four Black Tengers in the East. There is some talk in Mongolia that so many new shamans are now being recruited by the spirits because of a war between these two spiritual regions; but opinions differ widely, and conjecture over coffee and vodka can run wild.

The earliest authenticated records of Mongolian shamanism go back to the beginnings of the Hunnu Dynasty, 209–93 CE (also known as the Xiongnu in Chinese records). Mongolian legend tells us that, during this time, a nine-year-old Hunnu boy united with a she-wolf, engendering the modern-day Mongolian people. The headdress of a shaman (circa 300–100 BCE) was found in one of the graves of Noin-Ula (Mongolian: Noyon uulyn bulsh) in northern Mongolia, and is strikingly similar to the Mongol Darkhad headdress of today. The fabric’s colors, weaving methods, and embroidery are also similar to those found in fabric produced by Scythians in the Greek colonies on the Black Sea coast, leading scholars to draw links between these ancient cultures. (Scythian tribal areas were just west of Mongolian territories.)

According to Otgony Purev, shamans played an important role in diplomatic efforts and treaties with neighboring nations. The Hunnu emperors even constructed permanent shamanic shrines, and encouraged individual shamans to synthesize their diverse practices into a national religion. “Shamanist religion” then became part of the organizational basis of governmental and military activity.

Shamanism became the main source of education and ideology for the earliest pre-Mongol states. This continued for nearly 400 years, and ties to education remain influential in the Mongolian shamanic revival even today. With the disintegration of the Hunnu Dynasty, institutionalized shamanism returned to its more natural, individualistic and autonomous forms across a series of disparate Inner Asian kingdoms that spanned a millennium.

2. Frank J. Lipp, “The Role of Shamanism in State-level Societies: The Central Asian Case,” Shamanism: Journal of the Foundation for Shamanic Studies 24 (2011): 11–16.